It is not a gift till it doesn’t surprise!

Have you been under constant pressure to pull out rabbits from the hat on your partner’s birthday or anniversary or Valentine’s day?  Did you more often than not feel like pulling out your whatever-is-remaining hair from your head instead? Do you go bonkers thinking about how to pull off a surprise celebration or find the perfect gift for your partner?  Do you mostly end up feeling miserable after going wrong with the gifting scene on her special day?

If your answer to most of the question above is yes, don’t worry!  We can’t do jack about it!

But let me tell you this; Some women are sorted and pick what they want as gifts, few understand the emotions behind the surprise gifts and be happy with whatever you give them and rest of us, whatever you gift us, we are NOT going to like it because it is not of our choice BUT again, we want it as a surprise!  Simple?

I’ve heard many women complain that her man used to surprise her with flowers, gifts and experiences during the dating phase but things changed big-time post marriage! Guess what! That happened with me too!

When Ram and I were “just friends”, he was full of surprises and was extravagant at that!  Crazy handwritten letters, cards, dresses, chocolates, flowers, and many many other tiny thoughtful gifts! (Surprisingly, the dresses he sent from the US were a perfect fit too!  We hadn’t even met then….just saw each other on webcams…wait…umm….err…)  He always, always surprised me!  I remember once on my birthday, the one exactly before our marriage, he sent roses…loads of them and they kept coming for 3 days even after my birthday! 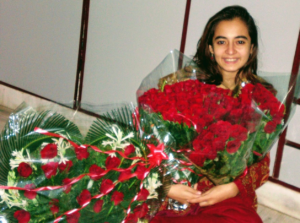 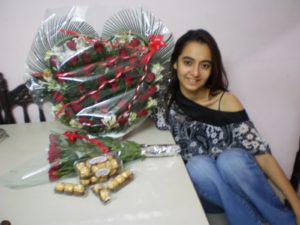 These are few of my favorite pictures! It is kinda funny though, getting so many flowers made me feel so special!…..but you cant blame a 21 years old for that, right?

So, one of the valentine’s day after marriage, we had a major argument! He had bloody spent 12k on just flowers!

We ended up being super pissed at each other;  He wondered what was ever wrong with me to get pissed at him for doing the same thing that had made me so happy and flattered in past and I wondered how insane he was to spend so much on flowers and what all we could have done with the money!

Anyways, that bugger has truly changed after marriage….he never surprised me with so many flowers ever again!

(He still brings me flowers occasionally though…actually without any occasion at all too! But never loads of them! Never!

Also, I learnt that I like tuberose way more than roses!

In 10 years of being married, I’ve learnt this; it needs sheer talent, to plan a perfect birthday or an anniversary surprise and not everyone has it!  It would suck if both in a couple are bad at it!  Fortunately for Ram, I am awesome at it!  Honestly, I just LOVE planning perfect occasions for him and searching for the perfect gifts too!

It is just sad that options to pick a gift for a man are limited;  clothes, perfumes, wallets, watches, I even went a step ahead and got him a beard trimmer and sports headset as surprise gifts but they just don’t have that oomph factor!

On other hand, the options for a man to gift his girl are just plenty!  But what a pity…chances of her not liking it are way more than her liking it!  I’ve done it all; returned the gifts, exchanged them for stuff I liked and some I did not even care to use, return or exchange! For one of my birthdays, Ram got me a smart watch and can you guess what happened next? Hint: I am not a gadget freak! AND HE KNEW THAT!

P.S.: He has goofed up so many of my birthdays with terrible planning that now I plan my own birthdays and anniversaries, cos I know I am special even without loads of flowers around! 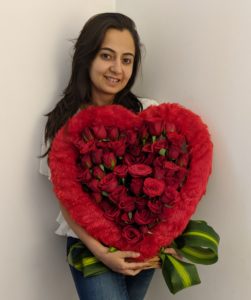 I know, I know! You have heard me rave about our 10th Anniversary so much already!  Well, there is a reason! It was actually a major milestone for us. My brother always told my mother to not spend a lot on my wedding, since he was pretty sure that I was going to be sent back home! But guess whaaaaaaaaaaaat! I made it!!! WE made it!

We had booked a resort in Coorg for the celebration and on our way, Ram asked me if I had requested for the cake at 12 am and I snapped at him big-time for not doing it already!  Out came the discussion on gender equality!  Why only the men have to plan for anniversaries and blah blah? The conversation was so amusing, I almost had a victorious smile on my face with “You know nothing Ram Snow!”

As we reached, this was waiting for him…

It was real challenge to keep kids out of bedroom all day! They kept wondering about what was the point of having so many balloons in the room if they couldn’t play with them!

Once we settled, we ordered lunch and as Ram opened the kitchen drawer to get the plates, he got his first gift!  I just said that that one was from Dhruvi and the next thing Ram did was….open all the cabinets, wardrobes and chests searching for more as he figured that there would be precisely two more; one from Riddh and another from me!  (Few Tees & Shirts!)

In evening, we got decked up for the dinner but we thought we would go to the fun zone first to check out if there were any interesting shows that kids would like to watch!

After the shows were over, I told him that we had to go to the room to change before heading to the restaurant as I was not feeling comfortable in a saree.  While walking back, I took him to the pool side….for our private dinner!  We thank our stars, kids went to sleep early that night!  It was beautiful to just laze around by the pool and talk! Like, A LOT!

As we reached the room, a gift was waiting for him on the bed.  It was a watch with a big dial and black metal strap, just like he loves them!  (Won’t tell you the brand…you are either going to call me a show-off or just lame…depending on ‘your’ financial status! But the gujju in me was super thrilled to get it at 50% off!

It was a night to remember! 🙂

Sheer talent as I said!

Needless to say, Ram was more than pleased!  He loves the surprises!  But you know what is more difficult than planning the surprises? To keep them!  It is just so tempting to blurt it out, right?

One of my favorite pictures from that holiday!

Well, the idea was to make it special for Ram but was he the only one to have a wonderful time?  Heck, I did not get any (surprise) gifts but looking at him smile like that…is nothing less than one!  So the bottom line is: If your partner is awesome at it, then many congratulations! IF NOT, DIY!  Don’t wait for anyone else to make it special for you!  Just like Bicky’s father says in the movie ‘Stree’, “Swayam Sevak Bano!”

But still, like Rakhi showed hope and faith with “Mere Karan Arjun Aaenge!”….I too do! Someday…hopefully someday….

A Very Happy Valentine’s Day to you, sweets!

SO! Are you a PRO or suck at it? What are your thoughts on “Surprise” gifts & parties? Would love to know in the comments section!