What are your thoughts on ‘consent’ when it comes to minors? Okay, before you get me wrong and pick an entirely different track…Let me clarify! I’m talking about taking permission from Riddh to share his stories with you as some of them are right up your alley!

He’s absolutely cool with me blogging about him coz who doesn’t love attention! Poor bugger doesn’t know how a blast from the past could mess up his present in future! 😛 So, however tempting, I am going to refrain from embarrassing him in front of his future friends/girlfriend/wife! 😛

But this one, I think, is more of ‘my mess’ than his! So Imma go ahead and drop it just for kicks!😎

Two and a half men

While maid does most of the household chores, I’ve saved folding the laundry for myself! Reason one, I mostly end up re-folding them as I don’t like the way maids fold and two, I feel a little accomplished after doing it! And since I am doing a ‘household chore’, I’m allowed to watch TV while I do it! (Not that I’m not allowed to watch it rest of the times but watching TV while folding clothes is my ‘guilt-free TV time’! There have been times when I look forward to folding laundry just so that I could continue watching the series I was watching anyways!)

And how comforting is it to watch a re-run of a show that you used to watch as a kid on TV! Friends, HIMYM, Two and a half men are all time favorites, right? So, during one of my guilt-free TV sessions watching TAAHM, Riddh and Dhruvi barged in! While Dhruvi watching it does not bother me as she can hardly comprehend the stuff but Riddh watching it does!

Isn’t Melissa’s mum one of the coolest characters on TAAHM? Pot… making out… making out with daughter’s boyfriend…pretty cool, right?! 😛 Funnily, Riddh and Dhruvi entered the room just a moment before Melissa’s mum shows a picture to Alan and says, “This is Melissa coming out of my vag**a!”

*UCK! It was too late to press the pause button!

Back to the story…I could see Riddh’s eyes growing bigger and eventually popping out! I knew I had goofed up big-time! But… just like any other responsible parent, I took the high road; pretended as if nothing had happened and diverted the topic!😎 Parenting, I tell you…so tough! 😛

Okay, I have an itch! (Or as Ram likes to put it, “Keeda hai tereme!”) I’m a sucker for closures! (But you already knew that!) 😀 I just cannot let things go or be! The freak in me just HAS TO talk it out and wind it up! So, after a couple of days of dodging the non-existent bullet, I gathered courage to stand with my head high, right in front of the bullet and get the chore done. (Or as Javed Akhtar would say….”udte hue teer ko…“) 😛

While I was whipping something in the kitchen, Riddh came back after his play time and I found my opening. After a bit of small talk, I dived right in…”Riddh, the other day on TAAHM you heard what you heard. Do you have a question that you want to ask me?” He said, “Yes! Is that how kids are born?!” Then I explained ‘the birds and bees’…well, more like dings and dongs…and reminded him about how he already knows about the process! (Very cool story that I so wish I could share! 😛 )

It was amazing to see him all amazed! “Now I know why the some kids looks like the father!” :O Well, whatever little (figuratively) but the father does have a contribution! 😛

After conquering the world and being proud of handling the things ‘maturely’, with a swagger, I concluded the session! And as a formality I asked, any other question? To my surprise, he asked, “Mummy, what is ‘period’?!”

Well, I’d asked for it! There was nothing I could do about it…but still with a hope of dodging again, I asked, “Are you sure you want to know about this right now? We still got time for this!” With his affirmative reply, I put the seat belt on and accelerated…make it two feats for the day!😎 So… Women, egg, blood, monthly, sanitary napkins, menstrual cups…

That is when the door bell rang and entered Dhruvi! After opening the door, I resumed and asked Riddh, ‘Capiche?‘ Utterly confused, he goes, “but I don’t get it! ‘My server is not working! Period!’ how does that make sense?”

Now, it was my turn to be disoriented! What the hell was he talking about! And then I realized! May be he doesn’t want Dhruvi to hear the ‘taboo talks’ and that’s the reason he is changing the subject! With new found respect for him, for protecting his younger sister, I told him I knew what he was doing! 🙂

That got him even more confused! “NO mummy! It doesn’t make sense! In chat someone said, ‘My server is not working! PERIOD!’  What does that mean!

THAT is when it hit me! I had crashed! The bugger was talking about a bloody PERIOD! A Full stop! (Bloody period! hah! 😀 Okay bad joke! 🙈 ) 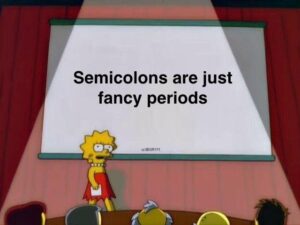 You can’t blame me for this, okay? We were talking about the birds and bees! It is only logical that the next question would be related! I’m still hiding my face in my palms for bombarding him with unwanted information!🤐 But kya karein!

Phew! I suck at a lot of stuff but never wanted parenting to be one of them, really! I totally believe that I screwed up by telling my ‘pre-teen’ about period stuff way too early but Ram still feels that he was/still is just messing with me! 😛 Funnily, We’ll never find out! 😀 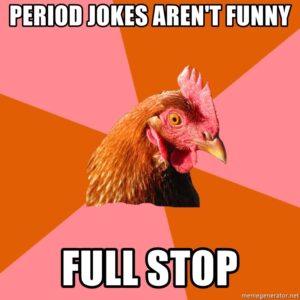 Okay! Your turn! How and when were you introduced to the idea of ‘birds & bees’? Shoot in the comments section 😀

BTW! After my last blog, I had my own personal #metoo movement! (And she doesn’t even drink! Din me! 😀 In your face @ Mummy 😛 )